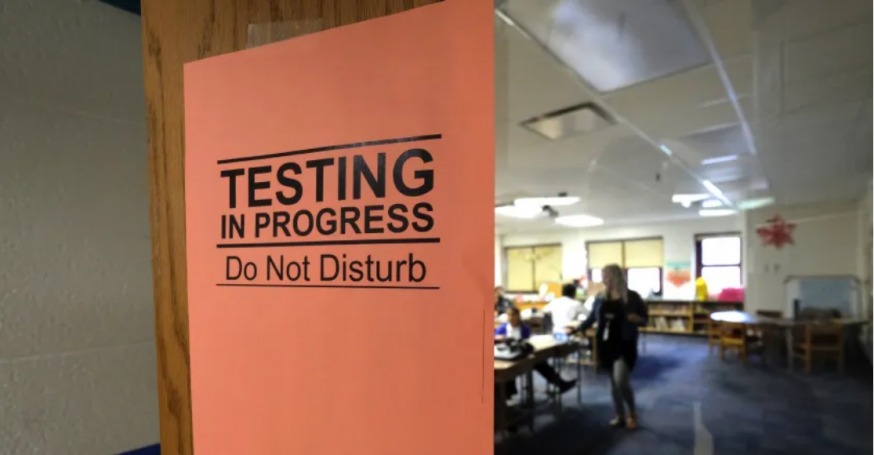 This article was originally published by Chalkbeat New York on Sept. 28, 2022,
By Reema Amin

Nearly half of New York City’s third through eighth graders passed their state reading tests last school year, while about 38% passed math, according to scores released by city officials Wednesday.

The scores are the first measure of how students across the five boroughs have fared in reading and math since the coronavirus pandemic upended in-person schooling and left many children grappling with isolation and grief. Though schools gave students other city-mandated assessments last year, officials have refused to publicly release the results.

“During the pandemic, kids went through all kinds of challenges that they’re still recovering from,” schools Chancellor David Banks told reporters Wednesday. “No matter what the latest test results tell you, I can tell you the system is broken in far too many ways. We are trying to create a new way forward.”

Looking at grade-by-grade data, however, provides a different picture for reading scores: For the youngest students, third and fourth graders, scores fell by 4 percentage points and 6 percentage points respectively.

City officials compared the scores to 2019 results, noting the past two years of disruptions. The state canceled the exams in 2020. The following year, the state allowed families to opt into taking them the following year. Just one-fifth of city students took them.

State officials, however, cautioned against comparing the test results to 2019 because of the ongoing effects of the pandemic and the “different rates of participation among students.” Roughly 10% of city students opted out of either reading or math exams, compared with 4% in 2019, education department officials said.

See here how your school fared on the state tests.

The percentage of children who passed math tests dropped for every major student group, with the largest decline among Latino students, by 10 percentage points. In contrast, passing rates for reading grew for every student group, with the largest increase among students known as “ever ELLs,” or students who were once considered learning English as a new language but are not anymore.

The scores could be one tool for schools to understand which students need more support this year. In response to the dip in national test scores, U.S. Secretary of Education Miguel Cardona said schools should be prioritizing COVID relief funds to boost academic support and extra tutoring.

However, as federal funds dry up, schools are receiving less money this year to create extra tutoring programs or provide extra support to students with disabilities. And unlike last year, schools can use that pool of money to hire staff as schools grapple with budget cuts, tied to projected declining enrollment.

Aaron Pallas, a professor at Teachers College and an expert in testing, doesn’t believe the scores can be compared to 2019 because of declining enrollment and higher opt-out rates. Compared with 2019, 21% fewer children took math tests and 18% fewer children sat for reading tests, according to city data.

Pallas said he expects people to use the scores to bolster arguments that traditional public schools don’t work, as Republican gubernatorial candidate Lee Zeldin has, but that there’s not enough information to make those conclusions.

“Quite honestly, I don’t really think [the scores are] that useful, certainly not for building level or district-level decisions about the allocation of resources,” Pallas said, adding that parents also won’t have the right context to understand their children’s results.

Some advocates said the scores signal that schools need more resources, particularly for younger children who were learning to read when the pandemic first hit, pointing to the dip in reading pass rates for third and fourth graders. Kim Sweet, executive director of Advocates for Children New York, said “it will be critical” to learn from new programs focused on improving literacy.

The scores could be a factor in middle and high school admissions this year. Schools that screen students were previously allowed to use test scores as one factor for admission, but that was paused during the pandemic and barred last year under former Mayor Bill de Blasio. City officials are expected to announce this year’s admissions criteria soon.

Banks has been critical of standardized testing, saying that schools that are laser-focused on exams can’t offer a “fully comprehensive learning experience.” On Wednesday, after touring classrooms at his alma mater, Hillcrest High School, Banks emphasized that the measure of student success is whether they’ll be prepared for quality jobs after they graduate.

“The return on investment is not the scores that they got on standardized exams,” Banks said. “Test scores are important, but they’re not everything.”

Unlike past years, Wednesday’s test scores could not immediately be compared to other New York districts or even statewide. In a departure, this year’s scores were released by New York City rather than the state, which has not yet released statewide results.

Officials plan to release statewide scores sometime this fall, but have not said when, and blamed the delay on a cumbersome process for releasing both preliminary and final scores this year.